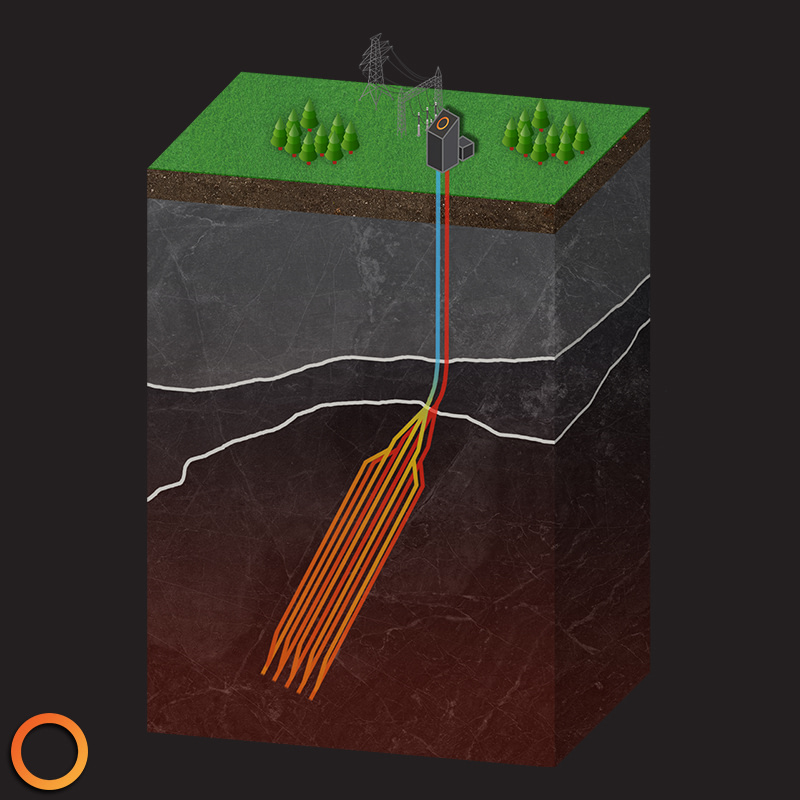 Locally produced electricity provides an abundance of benefits to a nation and its people. Furthermore, nations around the world can produce local carbon-free energy, supporting their efforts to reduce the amount of carbon they emit into the atmosphere.

Looking at the primary benefits, one could look at Canada as an example of a nation built upon supporting the growth of its oil and gas industry. This brought far more than economic prosperity, including high-paying jobs, better opportunities for local areas to reinvest in their infrastructure, and a reliable source of electricity to power commercial and industrial sectors – the list goes on.

Nations around the world are a pivotal point in their energy transition.

To continue to rely on foreign supply of traditional energy with increasingly high costs, or to invest in their energy security through locally produced carbon-free energy.

What are Advanced Geothermal Systems?

Advanced geothermal systems (AGS) refer to a recent innovation in geothermal technology, such as closed-loop systems. The process utilizes heat from deep underground that can be used to generate electricity or for commercial heating/cooling applications. Closed-loop systems harness heat via a working fluid in a closed-loop pipe system.

The Eavor-Loop 2.0 is an example of new innovation in AGS as a result of advanced drilling technology. This process includes drilling angled multilateral wells deeper into the rock to greatly increase overall heat extraction. This means the technology is stackable, meaning more scale and power at a single location. A technology that can go anywhere to provide carbon-free energy 24 hours a day, 365 days a year.

A tumultuous few years for the energy sector. Most notably supply chain issues resulting in delays in renewable energy projects, volatility in fossil fuels as a result of the invasion of Ukraine by a global leader in oil production, and the agreements many nations have made in efforts to reduce greenhouse gas emissions facing rising costs in materials.

The Paris Agreement was focused on economic and social transformation driven by a global effort to limit global warming. This agreement stated that by 2020, nations taking part had to submit their plans for climate actions known as nationally determined contributions (NDC’s).

Fast forward to 2022, many countries have faced political tensions relating to supply, rising costs in materials, and as a result, have seen many renewable energy projects delayed indefinitely.

A recent example saw Southern Co.’s Georgia Power solar project delayed as a result of U.S. trade investigations into Chinese panel suppliers. As of 2020, China accounted for almost 70% of all solar photovoltaic module production worldwide. As with any monopoly, companies that source materials from non-local producers have little control over how to ensure their projects are economically feasible, which in turn could impact the agreements with governments in the planning stages of future projects.

Southern Co’s Chief Financial Officer is quoted in BNN Bloomberg expressing his frustrations with the delay and the investigation. While in support of the investigation, he states in an interview “China is out there every day trying to lie, cheat and steal to gain economic advantage,” he said in the same interview. “It wouldn’t surprise me that they would try a variety of methods to avoid tariffs and compete in an underhanded way in the U.S”.

Similar problems ensue in wind energy. According to the IEA, offshore and onshore wind require the most critical minerals out of any other renewable technology, including a major requirement for copper, zinc, manganese, and nickel to name a few.

Vestas, a leader in wind energy production headquartered in Denmark, has faced delays due to increased costs of raw materials.

The company issued a variety of statements in relation to inflated costs, stating that they “expect the near future and at least 2022 to be heavily impacted by cost inflation, while the emergence of an energy crisis caused by geopolitics and fossil fuel volatility has also resulted in dramatic increases in energy prices”.

As noted in Vox in October 2020, geothermal energy was poised for a big breakout. This was primarily due to its scalability, in addition to advanced geothermal technologies’ ability to ‘go anywhere’ with a minimal surface impact.

Geothermal has regained global awareness through various innovations in enhanced geothermal systems (EGS), AGS, and advanced drilling techniques. Evidently through the transition away from fossil fuels, geothermal can provide job opportunities for oil and gas workers.

CEO of Transitional Energy, Johanna Ostrum, a Colorado-based geothermal company working to convert oil wells into geothermal energy production facilities shared her sentiment in an interview with Recode, “A lot of folks that I know, work in oil and gas, and when we look at a decarbonized future, there’s not going to be jobs for those folks” she said. “I think geothermal is a really great place for them to land. Oil and gas workers know how to safely, efficiently, and economically produce fluid”.

Brett Dawkins, the co-founder of Blue Cedar Energy, agrees. “All of the expertise that you would have as a petroleum engineer or a geologist will transfer over into the geothermal world,” Dawkins said.

Indonesia, the Philippines, and New Zealand are the largest geothermal-producing countries in the Asia Pacific region, accounting for 34% of the approximate global installed capacity of 15GW in 2020. Recent forecasts for 2025 reference a collective increase in market share to 45%.

A similar study published by Visiongain titled Geothermal Power Market Report 2022-2032 estimates a compound annual growth rate (CAGR) of 5%. The study notes many of the benefits as a result of this growth, including providing a diverse range of jobs, renewables functioning well supplementing electrical grids, and other new market opportunities.

Nations investing in the advancement of new geothermal technologies are putting their energy security first. With the support of governments, private, and public companies, meeting climate goals through geothermal offers the opportunity to provide local carbon-free energy to supplement their energy needs without restricting development as a result of supply chains, inflated costs, or geopolitical volatility.

UK Study on the Potential for Geothermal

Key Findings: Report on the Impacts of 24/7 Carbon-free Electricity Report

Get In The Loop